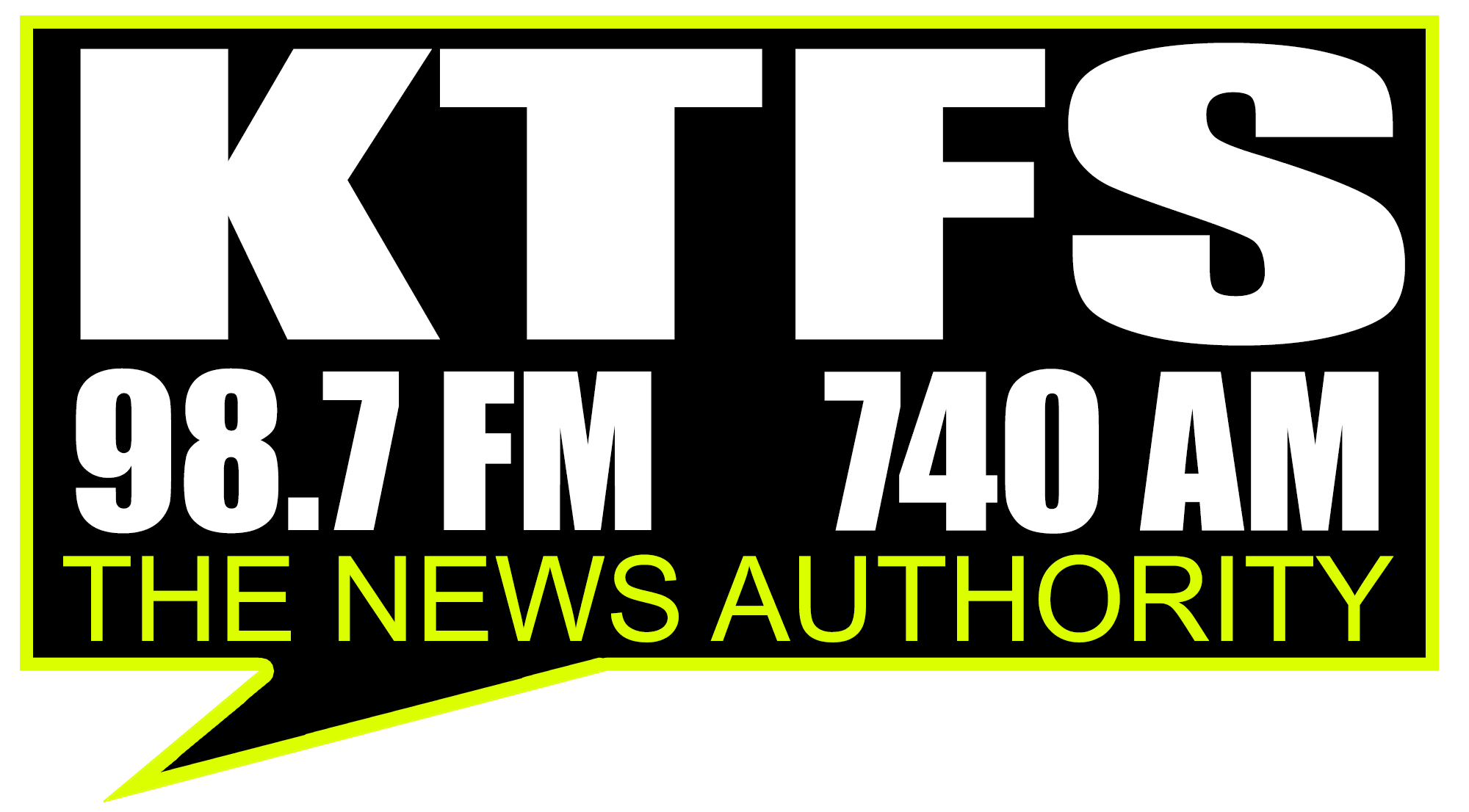 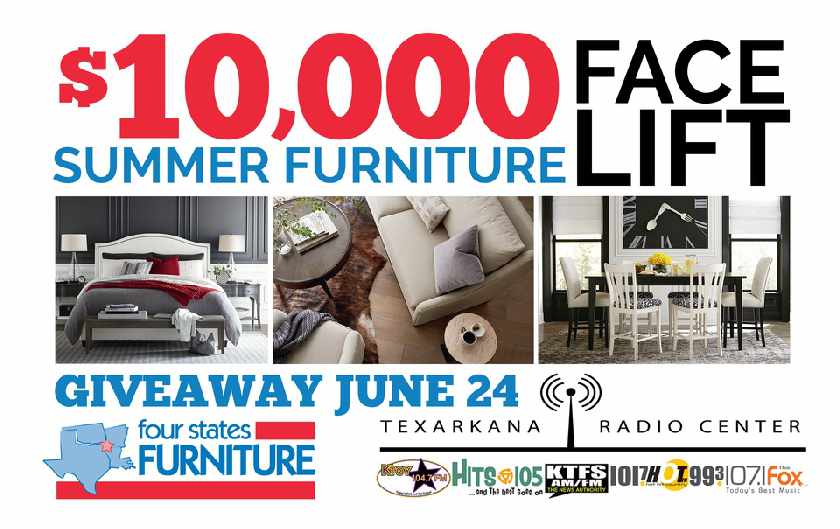 It's the Four States Furniture – Furniture Facelift! You can WIN $10,000 of brand new furniture, and give your home a summer makeover!

‘THE GLASS DOCTOR’ OF TEXARKANA - FIXING YOUR PANE - WHETHER IT BREAKS OR YOU NEED A NEW ONE
2021 Texas Blvd, Texarkana Texas

‘THE CATTLEMAN'S STEAKHOUSE’ - MORE THAN JUST A PLACE TO EAT, IT'S THE STEAK PLACE...
4018 North State Line Ave, Texarkana

‘HEALTHCARE EXPRESS’ - FITNESS IS NOT A HOBBY, IT'S A LIFESTYLE
5610 Richmond Road Texarkana Texas

You could WIN the $10,000 Furniture Facelift - from Four State's Furniture!

NO PURCHASE NECESSARY. PURCHASE WILL NOT IMPROVE CHANCES OF WINNING.

1. ELIGIBILITY: The Promotion is offered and open only to legal residents of the Greater Texarkana area at least {21} years old during the duration of the promotion period as defined below. Employees, agents, successors, assignees, officers and directors of Texarkana Radio Center LLC. (hereinafter “Sponsor”), and members of the immediate family (spouse, children, siblings, parents) or persons living in the same household (whether or not related) are not eligible. Groups, clubs, organizations, commercial entities, and businesses cannot participate. By participating, you agree to these Official Rules and to all decisions of Sponsor, which are final and binding in all respects. Void where prohibited

3. ENTRY: Listeners register at participating sponsors’ locations then listen for their name to be announced on 104.7 KTOY, HITS 105, 107.1 THE FOX, 101.7 HOT FM, 98.7 KTFS . One entry per person. Qualifying contestants have a qualifying letter generated by Texarkana Radio Center available for pickup from the studios at 615 Olive Street, Texarkana  Texas 75501 on or before 6/23/2017 by the close of the business day. This letter will be needed to register for the final event. Listeners who qualify after 6/23/2017 may pick up their letter at the final event at Central Mall. Qualifiers must present their qualification letter and government issued photo ID to station representatives at the registration table during the final event on 6/24/2017 no later than 1:30 PM.  Station representatives will have sole discretion to allow qualifier into the final registration.

In the event a qualifier cannot attend the final event, qualifiers may “assign” their qualified status to another individual provided that the individual meets all eligibility requirements; the qualification letter should be noted with the intent of the original qualifier to “assign” their status. This requirement must be done to the satisfaction of the station representative. The assignee will then become the contestant and all prizes and responsibility will be awarded to them solely.

4. PARTICIPATION AND WINNING: When their name is announced contestants will have 10 minutes to call the announced telephone number and qualify. Contestants that call within the allotted time will move on to the final event on 6/24/2017 at Central Mall. The call-in time and requirement may be waived. Such waivers will be announced when applicable. Qualifiers will be eligible for the grand prize. In addition to our on air qualifiers, qualifiers may be chosen from listeners entering at the final event on 6/24/2017. Qualifiers must be present at the drawing at Central Mall on 6/24/2017 to win. Around 1:45PM a station representative will draw a name from all registered qualifiers. The name will be announced at least 3 times. If there is no response within approximately 30 seconds of the name being announced, the name will be discarded and a new name drawn..

5. PRIZE/ODDS/LIMITS ON PRIZES AVAILABLE: (1) Grand Prize: $10,000 Summer Furniture Face Lift from Four States Furniture. The odds of being chosen as a contestant are dependent upon the number of entries received. Prize is not transferable and may not be given, bartered, sold, or exchanged for another prize. All taxes on any prize awarded are the sole responsibility of the winner.

6. GENERAL CONDITIONS: Potential winner will be required to complete, execute and return an Affidavit of Eligibility, a Liability Release, and where lawful, Publicity Release within fourteen (14) days of the date of the win. In the event potential winner fails to timely return documents, or prize is returned as non-deliverable, or if potential winner is found not to be eligible or not in compliance with these Official Rules, disqualification may result. No alternate winner will be selected. By accepting a prize, where permitted by law, potential winner grants to Sponsor and Sponsor’s designee, its parents, subsidiaries and related companies, and those acting pursuant to the direction of Sponsor, the right to print, publish, broadcast and use, worldwide in any media now known or hereafter developed, including but not limited to the World Wide Web, at any time or times, the winner's full name, photo, picture, portrait, or other likeness, voice and indicia of persona, and biographical information as news or information, and for advertising, trade, and promotional purposes without additional compensation or consideration, and without notification, review or approval.

Each participant, as a condition of participating, releases and agrees to indemnify and hold harmless Sponsor, the prize provider, their respective parents, affiliates, subsidiaries, related companies, advertising and promotion agencies and all of their respective directors, officers, employees, representatives, agents, successors and assigns from any and all liability for any injuries, loss or damage of any kind to person(s), including death, and property, arising in whole or in part, directly or indirectly, from acceptance, possession, use or misuse of a prize or participation in any Promotion related activity, or participation in this Promotion. The winner shall bear all risk of loss or damage to his/her prize after it has been delivered.

Sponsor reserves the right, at its sole discretion, to disqualify any individual from the Promotion that it finds, in its sole discretion, to be tampering with the entry process, or the operation of the Promotion, to be acting, or be, in violation of the Official Rules; or to be acting in a non-sportsmanlike or disruptive manner, or with intent to annoy, abuse, threaten or harass any other person or interfere in any manner with any aspect or portion of this Promotion. Any use of robotic, automatic, macro, programmed, copied, or like entry methods, will void all such entries by any such methods, and will disqualify any participant using such methods.

7. LIMITATIONS OF LIABILITY: a) Any attempted participation by means other than those permitted by these Rules, is void. Sponsor and any participating promotion agencies or prize providers will not be responsible for lost, late, incomplete, stolen, misdirected, illegible or postage-due entries; or any technical error or failure, or unauthorized human intervention, or for the inaccurate capture of entry or other information, or the failure to capture any such information. Sponsor is not responsible for contacting any participant if that participant has changed contact information and failed to provide Sponsor with the proper contact information when such information is required.

b) Neither Sponsor nor any participating promotion agencies or prize providers are responsible for any incorrect or inaccurate information or for any faulty or failed electronic data transmissions, lost, late, damaged, misdirected entries, incomplete or inaccurate capture of entry information (regardless of cause). If, for any reason, the Promotion is not capable of running as planned for any reason which Sponsor, in its sole opinion, deems could corrupt or affect the administration, security, fairness, integrity or proper conduct of this Promotion, Sponsor reserves the right to terminate, modify or suspend this Promotion, in whole or in part, and if possible, to select the Contestants from entries received prior to the action taken or as otherwise may be deemed fair and appropriate by Sponsor.

IN NO EVENT WILL SPONSOR, ANY PARTICIPATING PROMOTIONAL COMPANIES OR PRIZE PROVIDERS, OR THEIR RESPECTIVE PARENTS, AFFILIATES, SUBSIDIARIES AND RELATED COMPANIES, THEIR ADVERTISING OR PROMOTION AGENCIES OR THEIR RESPECTIVE OFFICERS, DIRECTORS, EMPLOYEES, REPRESENTATIVES, AGENTS, SUCCESSORS AND ASSIGNS BE LIABLE FOR ANY DAMAGES OR LOSSES OF ANY KIND, INCLUDING DIRECT, INDIRECT, INCIDENTAL, CONSEQUENTIAL OR PUNITIVE DAMAGES.

8. MISCELLANEOUS: This Promotion is subject only to the laws of Alaska in the United States. Prizes will be awarded and/or delivered only to addresses within the United States. Unclaimed prizes will not be awarded. Additionally, Sponsor reserves the right to prosecute any fraudulent activities to the full extent of the law. Failure to comply with these Official Rules may result in disqualification. CAUTION: ANY ATTEMPT BY AN ENTRANT OR ANY OTHER INDIVIDUAL TO DELIBERATELY DAMAGE OR UNDERMINE THE LEGITIMATE OPERATION OF THE PROMOTION MAY BE A VIOLATION OF CRIMINAL AND CIVIL LAWS AND SHOULD SUCH AN ATTEMPT BE MADE, SPONSOR RESERVES THE RIGHT TO SEEK DAMAGES FROM ANY SUCH PERSON TO THE FULLEST EXTENT PERMITTED BY LAW.

9. ARBITRATION/CHOICE OF LAW: Except where prohibited, participants in the Promotion agree that: (1) any and all disputes, claims, and causes of action arising out of or connected with this Promotion, or any prizes awarded, or the administration of the Promotion or the determination of winners, shall be resolved individually, without resort to any form of class action, and exclusively by arbitration, to take place in the State of Alaska, U.S.A. pursuant to the Rules of the American Arbitration Association, then effective, (2) any and all claims, judgments and awards shall be limited to actual out-of-pocket costs incurred, including costs associated with entering this Promotion but in no event attorneys’ fees; and (3) under no circumstances will a participant be permitted to obtain awards for and participants hereby waive all rights to claim punitive, incidental and consequential damages and any other damages, other than for actual out-of-pocket expenses, and any and all rights to have damages multiplied or otherwise increased. Except where prohibited, all issues and questions concerning the construction, validity, interpretation and enforceability of these Official Rules, or the rights and obligations of participant(s) and Sponsor in connection with the Promotion, shall be governed by, and construed in accordance with, the laws of Texas, without regard to conflicts of law doctrine.