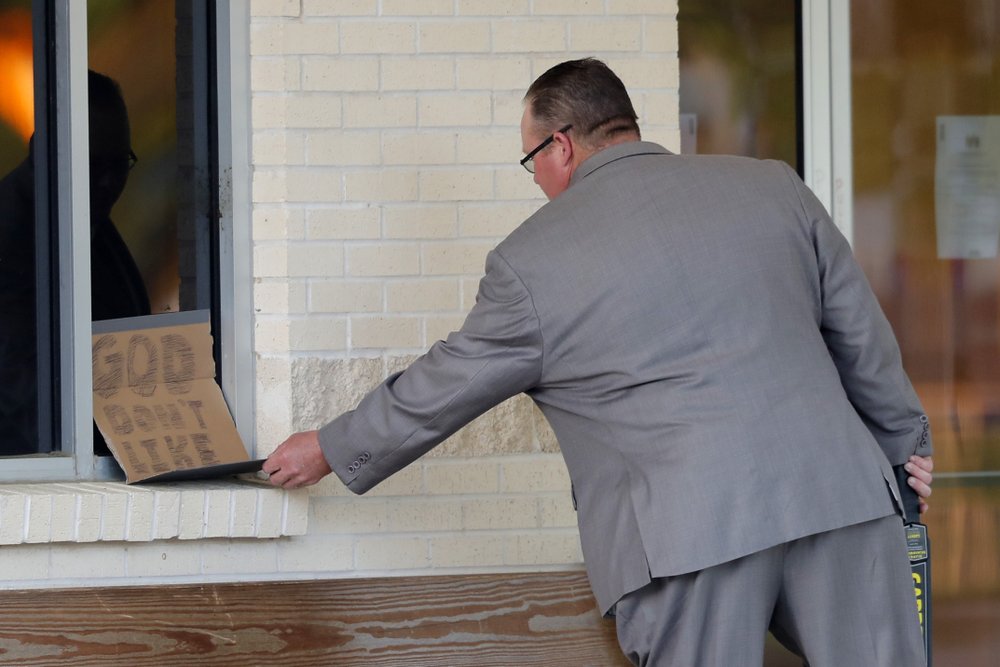 Pastor Tony Spell says Judge Roy Moore has been hired to represent his church and defend him against criminal charges. Moore will hold a press conference today at noon.

Buses and cars filled a Louisiana church parking lot for another service Tuesday evening as worshippers flocked to hear a Louisiana pastor who is facing misdemeanor charges for holding services despite a ban on gatherings amid the coronavirus pandemic.

A few protesters turned out, too, including a man shouting through a bullhorn against those gathering at the Life Tabernacle Church in the city of Central, where pastor Tony Spell has been holding services. Another demonstrator held up a sign reading: “God don’t like stupid.”

Afterward, people began leaving the church, some chatting outside the front doors, and many appearing to not be adhering to social distancing recommendations to remain at least six feet (2 meters) apart. Hugs and handshakes were shared freely as people said their goodbyes and departed.

Hours earlier on Tuesday, Spell was issued a summons for holding services previously at the church in violation of the governor’s order banning gatherings.

“Come out, Tony. Come tell us why you’re endangering people’s lives,” the man with the bullhorn shouted Tuesday evening, directing his words at the pastor.

Flanked by some of his congregation, including children and older people, Spell emerged from the church later Tuesday night and said he is going to keep his church doors open. He said he doesn’t consider keeping his doors open any different than keeping the doors of Walmart open. Spell also compared going to church to going to the hospital, but for spiritual healing.

“We are needy people. Our souls are lost,” he said. “We need help, and the church is the salvation center of the soul, the sanctuary where we come together and meet.”

Around Louisiana, more than 5,200 people have confirmed virus infections, and 239 state residents have died, according to the Louisiana health department.

“The whole situation just puts everyone at risk,” Moore said. “We ask everyone to abide by the governor’s order.”

The governor has urged church leaders instead to continue their services online or in smaller groups to lessen the risks.

Spell had previously confirmed he was facing misdemeanor charges. He said when reached by phone earlier that he was read his rights and fingerprinted — but the summons wasn’t deterring him. He said he would continue to defy the ban.

“We’re still here and still assembling and having church,” Spell said. Asked why he was defying the governor’s orders, he said, “Because the Lord told us to.”

Asked whether he was concerned about the pandemic, Spell said: “I’m no more concerned than I would be going to Walmart or Home Depot.”

Moore said earlier that additional charges could be issued if Spell continued to disobey Edwards’ ban on gatherings. He said the pastor wasn’t booked into jail earlier because parish officials are trying to lessen the jail population amid the risks of the highly contagious virus.

Edwards said Tuesday that law enforcement authorities had been “extremely patient” with Spell and had “done everything that they could” to get him to comply with the governor’s order before issuing the summons.

“I’m going to appeal to them one more time: Please stop what you’re doing,” Edwards said. “The overwhelming majority of our faith leaders have found other ways to engage with their parishioners.”