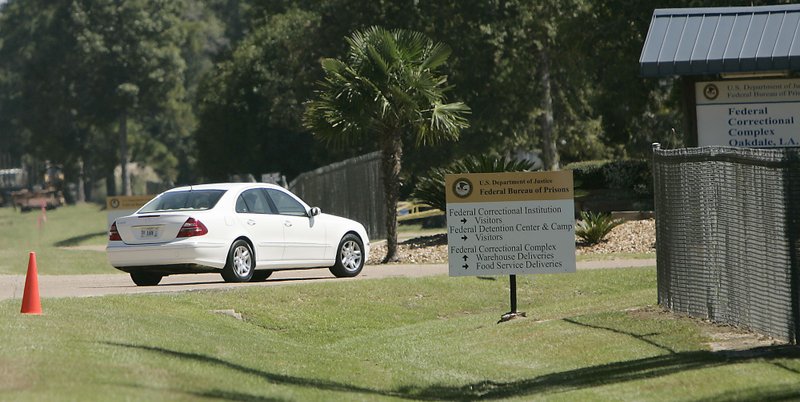 WASHINGTON (AP) — The federal Bureau of Prisons is locking all its 146,000 inmates in their cells for the next two weeks in an unparalleled effort to slow the spread of the coronavirus, as the focus shifts to a Louisiana compound, where three inmates have died and nearly 20 others remain hospitalized.

The compound, known as FCC Oakdale, has emerged as ground zero in the federal prison system’s struggle to contain coronavirus behind bars. The situation there is so dire that the local health department told the federal government there was no need to test inmates anymore for the coronavirus, officials said. Those showing symptoms should be presumed to have it.

On Wednesday, the agency confirmed that two inmates at Oakdale had died. They identified one as 43-year-old Nicholas Rodriquez and were still attempting to notify the second man’s family Wednesday evening. Just days earlier, another man, serving a 27-year drug sentence, died at a hospital from the coronavirus. Officials said both that man and Rodriquez had serious, long-term, underlying health conditions. They are the only deaths so far in federal prisons, but state and local lockups have seen deaths.

So far, 11 Oakdale inmates have tested positive, 19 others are in the hospital and suspected of having the disease, 32 are in isolation with symptoms and 82 have been quarantined because of possible exposure, according to local union president Ronald Morris.

In addition, 13 staff members have tested positive, one is hospitalized in an intensive care unit at a hospital in Alexandria, about 50 minutes away, and about 16 others are out of work awaiting test results.

The Bureau of Prisons said the uptick is “consistent with the surge of positive cases in Louisiana” and because there were so many cases at the prison, local health officials have recommended not testing anyone else who shows COVID-19 symptoms and instead presume they are positive.

But Kevin Litten, a spokesman for the Louisiana Department of Health, said officials did not tell the prison to stop testing prisoners. He said state officials advised the prison, in the absence of testing, to isolate prisoners with symptoms.

Louisiana has emerged as a hot spot for the virus, with the death toll at 273. The number of confirmed cases grew 23% overnight, topping 6,400, according to the latest figures. About 23% are hospitalized. Nationwide, there are more than 200,000 cases.

“What’s happening in Oakdale is a tragic and avoidable example of what happens when officials fail to heed the advice of public health experts who have warned from the beginning that prisons and jails would become dangerous breeding grounds for this disease,” said Katie Schwartzmann, legal director of the Louisiana American Civil Liberties Union. “This should be a wakeup call to state and local officials that this is an imminent threat to public health that must be addressed immediately.”

The situation at Oakdale is fueling fear among inmates and staff members in the rest of the Bureau of Prisons system that the virus could spread just as rapidly at any of the other 121 correctional facilities, though the rate of infection compared with outside prison is low. Health officials have been warning for more than a decade about the dangers of epidemics in jails and prisons, which are ideal environments for virus outbreaks.

On Wednesday, the Bureau of Prisons moved into a new phase of its coronavirus response plan: a nationwide lockdown. In an effort to slow the virus’ spread, officers will lock all inmates in their cells for 14 days. The agency said in a statement that “to the extent practicable” inmates should still have access to services like mental health treatment and education programs.

Even as officials shift their focus to trying to combat a potential coronavirus epidemic, officers are continuing to face challenges of managing inmates and struggling with severe staffing shortages. Earlier this week, an inmate walked away from a minimum-security federal prison camp in Three Rivers, Texas. He’s now wanted by the U.S. Marshals Service.