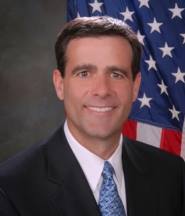 The office of Rep. John Ratcliffe announced today the addition of Wounded Warrior Fellow, Charles Jordan, to the district staff. Jordan, a U.S. Army combat veteran, will serve as a constituent services liaison in the Texarkana office. “With more than 700,000 constituents and 63,000 veterans in Texas’ 4th District, it’s critical that my staff is equipped to handle each of their unique needs,” Ratcliffe said. “I’m grateful that Charles – a veteran himself – is joining our team to help ensure we can best serve all constituents – and especially our veterans. With his hire, I’m proud that my staff now includes veterans of the U.S. Army, Air Force and Navy.” Prior to joining Ratcliffe’s staff, Jordan served in Operation Iraqi Freedom III from 2006 to 2007. He then served as a Military Technician for the DoD-USARC from 2009 to 2016. He was also deployed in support of Task Force Rita and Task Force Katrina. He said he felt called to join the military following the 9/11 terrorist attacks. “Congressman Ratcliffe’s commitment to veterans is well known, and I am glad to be a member of his team. I look forward to helping to make an impact on the lives veterans and on all constituents in the district,” Jordan said. As a constituent services liaison, Jordan’s primary responsibilities will include: processing veteran and military casework requests, helping veterans and service members navigate federal government agencies and veteran outreach. Last year alone, Ratcliffe’s staff served more than 850 constituents and helped recover $280,000 in frozen VA benefits. Jordan has lived in the Texarkana area for 15 years with his wife and five children where he serves the community through his involvement with his church, the Randy Sam’s Homeless Shelter and prison ministry. He holds a bachelor’s degree from Texas A&M University-Texarkana, an associate degree from Anchor Theological Seminary & Bible Institute and is pursuing a master’s degree in instructional technology from Texas A&M-Texarkana.